Rand Paul Mocks Idea That NSA Dragnet Necessary: Why Not ‘Put A Microchip In Every Baby Born?’
video

Rand Paul Mocks Idea That NSA Dragnet Necessary: Why Not ‘Put A Microchip In Every Baby Born?’ 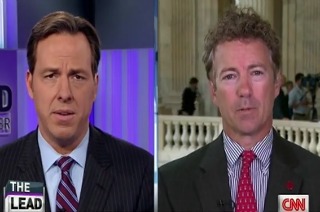 Appearing on CNN with host Jake Tapper on Wednesday, Sen. Rand Paul (R-KY) mocked the notion that the National Security Agency’s monitoring all Americans’ communications were essential because they have prevented some attacks. He noted that you could curtail most criminality by putting microchips in newborns or installing cameras in all apartments, but that would be unconstitutional.

Tapper asked Paul to react to testimony delivered by National Security Agency Director Gen. Keith Alexander in which he said that the NSA’s phone records program led to preventing a terrorist plot to attack the subway system in New York City.

Paul said that the credibility of the nation’s intelligence community is presently in doubt. “They frankly lied to us in open testimony in committee,” Paul said.

“Even though we’re trolling through a billion phone calls a day, we’re still having attacks because of poor police work,” he continued. “Those who argue, ‘Well, we can catch people if we just do this,’ if we put a microchip in every baby born we could follow everybody better. Or, if we said, ‘well, all crime is committed by people who live in apartments; why don’t we put cameras in everyone’s apartments?’”