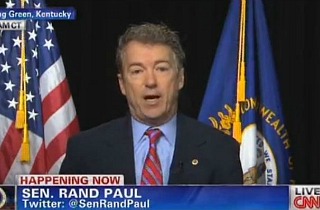 Sen. Rand Paul (R-KY) sharply criticized President Barack Obama’s speech on Friday in which he outlined some reforms to the National Security Agency’s bulk domestic metadata collection practices. Paul told CNN anchor Wolf Blitzer that the president essentially told the public, “If you like your privacy, you can keep it.”

“What I think I heard was that, ‘If you like your privacy, you can keep it,’ but in the meantime we’re going to keep collecting your phone records, your emails, your text messages, and likely your credit card information,” Paul told Blitzer. “So, I didn’t hear any lessening of the spying on Americans or collection records of Americans. I heard that ‘Trust me, I’m going to put some more safeguards in place, but I’m going to keep right on collecting every Americans’ records.”

Paul said that the Supreme Court would ultimately have to decide the constitutionality of the programs the president defended on Friday. He noted that Obama mentioned the American Revolution, but the president seemed to have failed to internalize the lessons of the Revolution.

Paul asserted that the Fourth Amendment requiring individualized warrants be presented to the accused was a result of British overreach in the 18th Century, and the NSA’s practices amount to a “general warrant” which he believes violates the Constitution.