Rand Paul: Obama Made Americans Think Ebola Is Like AIDS 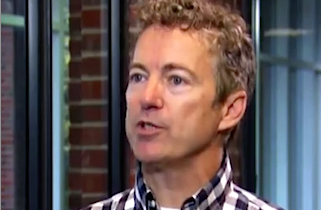 In an interview with Bloomberg Politics’ Mark Halperin set to air on the new With All Due Respect show tonight, Sen. Rand Paul (R-KY) expressed his criticism of the way President Barack Obama’s administration has handled the Ebola issue over the last few weeks.

Paul accused the White House of not “being completely forthright” with the American people about how Ebola is transferred. “They have so wanted to downplay this that they really, I don’t think, have been very accurate in their description of the disease,” he said.

When officials said Ebola can only be contracted through a “mixture of bodily fluids through direct contact,” Paul said he immediately thought of AIDS. “You don’t get AIDS at a cocktail party, so my level of alarm goes down,” he said.

“It isn’t really like AIDS,” Paul added, saying that “direct contact” in this case means you can actually be three feet from somebody. “Because they so much wanted to downplay that ‘we were in charge, we know everything about this,’ I think they made mistakes in not really being accurate in talking about the disease,” he concluded.

In contrast, the CDC says that Ebola is transmitted through “direct contact (through broken skin or mucous membranes in, for example, the eyes, nose, or mouth) with blood or body fluids (including but not limited to urine, saliva, sweat, feces, vomit, breast milk, and semen) of a person who is sick with Ebola.”

Watch video below, via Bloomberg Politics: