Rand Paul Blasts Christie: He’s The ‘King Of Bacon’ On Spending, ‘Big Mistake’ To Feud With Me 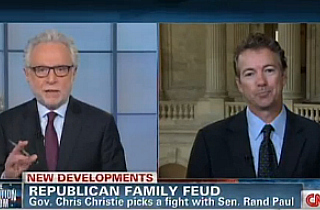 Appearing on CNN’s The Situation Room this afternoon, Sen. Rand Paul (R-KY) responded to Chris Christie‘s Tuesday morning assertion that the senator is a “pork barrel spender” by cautioning the New Jersey governor not to pick a fight with him.

“This is the king of bacon talking about bacon,” Paul said of Christie, directly responding to the governor’s assertion that Paul’s Kentucky engages in “pork barrel” with federal dollars. The Republican Senator noted that his home state is largely populated by military bases, which account for a great deal of the federal spending on Kentucky:

“What does he want to do, shut down military bases in Kentucky?” he told CNN host Wolf Blitzer. “In order to have enough money for national defense, which I think is a priority for the government, you have to be willing to cut spending in other places, and Governor Christie and others have been part of this ‘gimme gimme gimme’, ‘give me all this money.'”

In the aftermath of Hurricane Sandy, Gov. Christie and New York Republican Rep. Peter King were vocal in urging Congress to pass more than $50 billion worth of aid to the states devastated by the storm. Paul and others, however, countered at the time that the government should offset those funds with spending cuts elsewhere.

The senator also cautioned Christie that it might not be the best decision to continue feuding with a fellow Republican who has strong pull among young and independent voters:

“It’s not helping the party for him to pick a war with me. It’s a big mistake. It’s not very smart. And it’s not a good way to grow the party,” Paul said. “Why would he want to pick a fight with the one guy who has a chance to grow the party by appealing to the youth and appealing to people who would like to see a more moderate and less aggressive foreign policy?”