Rand Paul on CNN: I’ve Never ‘Intentionally’ Plagiarized, But Have Been ‘Sloppy’ 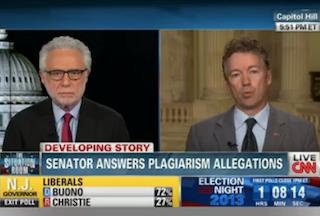 Sen. Rand Paul (R-KY) continued his semi-apology tour on CNN’s The Situation Room Tuesday after previously vowing to avoid plagiarism in future speeches and articles in an interview with The New York Times. Paul assured Wolf Blitzer that he never “intentionally presented anyone’s ideas as my own.”

“Ultimately, I’m the boss, and things go out under my name, so it is my fault,” Paul said, finally owning up to the accusations first leveled against him by MSNBC’s Rachel Maddow. At the same time, Paul complained that “the standard that I’m being held to is a little higher than everybody else.”

“Did we make mistakes?” Paul continued. “Yeah. I’m the first to admit I’m imperfect. But I do get offended when people try to cast aspersions on my character because I’m honest. I’ve never tried to mislead people.”

The senator said he plans to be “much more specific and footnote everything as if it was a college paper” moving forward. “I do take this personally,” he said, “and I don’t want to be accused of misrepresenting myself, and I’ve never intended to do so. But I think we’ve been sloppy and we’re going to be much more precise in the future.”

Before leaving, Paul weighed in on the gubernatorial elections today in New Jersey and Virginia. Asked what a likely Chris Christie win and Ken Cuccinelli loss could mean for the future of Republican Party, Paul was diplomatic. He would only say that the GOP “needs moderates” like Christie who can win in blue states as well as tea party candidates like Cuccinelli.