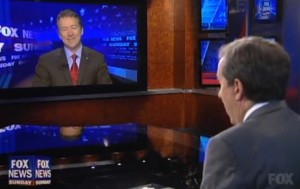 In an appearance on Fox News Sunday, Senator Rand Paul (R-KY) continued to press the issue of whether President Obama‘s nominee for CIA director, John Brennan, believes that the President has the authority to order drone strikes on U.S. citizens on American soil, as well as on foreign soil. Host Chris Wallace pressed Paul on his objections, asking “If we knew where an al Qaeda operative was, American or foreign, on U.S. soil, wouldn’t we just go and catch him?”

“You would think,” Paul replied, before delving into Brennan’s response to that question.

Wallace began by asking Paul about possible judicial oversight over the drone program, but Paul quickly narrowed the topic. “What I’m asking is about drone strikes on Americans, on American soil. The president will not answer that he cannot do this, in fact he seems to be asserting that he can do this… all he’ll say is he doesn’t intend to do this. It is like him to saying, I don’t intend to override the Second Amendment, but I might.”

“I thought you were objecting to drone strikes on American citizens on foreign soil as well,” Wallace interrupted. “Is that not true?”

“I’m primarily asking, the primary question is, Americans on American soil, can the President kill them with a drone strike from the program,” Paul responded, later conceding that he also believes even Americans overseas should be tried for treason before being killed in drone strikes. “You should get protection for being an american citizen,” he said.

The memo that outlines the legal rationale for the drone program lists, as one of the criteria for a strike, that “capture is infeasible,” which Wallace seemed to be referencing when he asked Paul “If we knew where an al Qaeda operative was, American or foreign, on U.S. soil, wouldn’t we just go and catch him?”

“You would think,” Paul replied, “but here’s Brennan’s response. He says the authorization to use force in 2001 in Afghanistan has no geographical limits. So, when he says that, our first question is, gosh, he is implying he could do it in America?”

Sen. Dianne Feinstein asked Brennan about just that possibility, and received the response that Sen. Paul finds so disturbing:

Brennan answered, “This administration has not carried out drone strikes inside the United States and has no intention of doing so.”

The overlooked central problem that the drone program highlights is the problematic designation of counterterrorism as a “war,” overlooked because Congress lacks the political will to do anything about it, like repealing or amending the Authorization for the Use of Military Force. Chris Wallace is right, according to the memo that the administration put together, any terror suspect operating on U.S. soil would likely not meet the “capture is infeasible” bar that it sets forth, and Brennan’s response supports that. However, if terrorism is a “war,” if that is the operating theory, then how could anyone absolutely rule out every scenario under which such a “war” could be fought? The same “ticking time bomb” that was used to justify torture also leaves open the possibility that capture might one day be infeasible in order to prevent an attack from within the United States.

While there is lots of hand-wringing over the drone program, no one is suggesting that we no longer treat it as a war. They would all much rather slap the President’s hands than tie them.