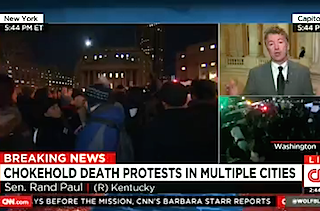 With the protests against the grand jury decision in the Eric Garner case entering their second night, Sen. Rand Paul (R-KY) appeared on CNN where host Wolf Blitzer asked him to weigh in on his potential 2016 presidential opponent Hillary Clinton’s recent comments on the matter. On this issue at least, it appeared there wasn’t much daylight between the two politicians.

Blitzer played a clip of Clinton’s remarks, in which she said, among other things, “we have allowed our criminal justice system to get out of balance” and asked Paul if he agreed.

“Well, you know, I have six different bills to reform the criminal justice system and we would welcome Hillary Clinton, if she would like to come and help us promote this agenda,” Paul said, noting he has been working with Democrats on this issue. “If she wants to join me, and help to support these bills we’ve been pushing on criminal justice, we would welcome her support.”

“So it sounds like you and her, at least in this narrow area, might be on the same page, right?” Blitzer asked.

Again, Paul resisted giving a yes or no answer, instead urging Clinton to put out “more concrete proposals” as he has done. Moving away from the question of excessive force by police, Paul instead turned to the alleged crime Garner was committing when police confronted him. “Would she try to make the sale of cigarettes not such a burdensome thing that it drives people into the black market?” Paul asked of Clinton. “And my guess is that her notion of sort of the busybody nature of government is that she wouldn’t support reducing taxes.”

So now we know: Paul and Clinton agree on criminal justice reform, not so much on taxes.