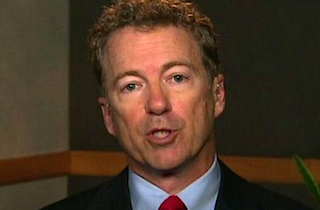 “I’m not big on defending Donald Trump by any means and I’ve been one of his fiercest critics,” Rand Paul told host Michael Smerconish on his SiriusXM radio show Friday morning. But all that being said, the candidate still proceeded to take Trump’s side on the question of whether Hugh Hewitt was guilty of asking “gotcha” questions about the Quds Force during his interview with the GOP frontrunner last night.

Paul said he too sometimes has trouble hearing the difference between “Quds” and “Kurds” and gave Trump the benefit of the doubt on that confusion. “And I also thinking that running through a list every different Arab name and asking people to respond to them is a little bit of a game of ‘gotcha,'” Paul added. But at the same time, he said that knowing the difference between Hamas and Hezbollah is an important attribute for the next president of the United States.

When Hewitt asked Trump if he thought a question along those lines also qualified as a “gotcha,” Trump replied, “Yes, I do. I totally do. I think it’s ridiculous.”

“Like I say, I’m not into defending Donald Trump and you find it often,” Paul said. “But I think some interviewers do like to play this game.”

During a phone appearance on Morning Joe Friday, Trump dismissed Hewitt, who will be one of the moderators at this month’s GOP debate on CNN, as nothing more than a “third-rate radio announcer.”

Listen to audio below, via The Michael Smerconish Program: