Rand Paul Returns To Clarify: He Would Vote For The Civil Rights Act 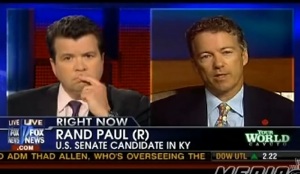 For a while there, it seemed that we had heard the last of Kentucky Senate candidate and Tea Party poster boy Rand Paul, at least in the national spotlight. After a short hiatus, however, Paul is back with Neil Cavuto on Fox News, still defending the same comments about the Civil Rights Act and government regulation, still bashing the media for making him their designated “punching bag” for the week.

For those of you who have already forgotten (a lot– mostly major global crises— has happened in the time Paul took his short break), Rand Paul is the proudly libertarian son of proud libertarian Congressman/Doctor/Presidential candidate Ron Paul, who successfully got the mainstream media to talk about 40-year-old unanimously-beloved legislation almost non-stop for a week instead of discussing, say, the BP oil spill in the Gulf of Mexico. Not that the 1964 Civil Rights Act was particularly relevant to his Senate bid, but it still put him on the defensive and immortalized him as one of three people to ever to cancel on Meet the Press (the other two are Nation of Islam head Louis Farrakhan and Saudi Arabia’s Prince Bandar).

After taking some time to regroup off-camera, Paul returned to the national spotlight on Your World yesterday to defend his name and that of the Tea Party from the recent attacks. Cavuto made him reiterate that, no, he is not against the Civil Rights Act, nor did he ever make the Civil Rights Act a campaign issue. That, he said, came from “people who want to make the Tea Party something it’s not, people who want characterize me as someone who I am not,” like the New York Times, he continued, who “blatantly got it wrong when they read the transcript of the show that I was on, and even the show that I was on, which was on a left-wing network, corrected the New York Times” the show he references is Rachel Maddow). The reason for their blatant dishonesty? “Everybody wants a punching bag, and I was it there for a week.”

He also clarified rumors of a campaign shake-up after his civil rights scandal– “no one was hired; no one was fired,” he explained. Only some people, namely, his campaign manager, got promoted. But he couldn’t end the interview without making at least one controversial statement: BP shouldn’t be “villified,” because it wouldn’t be constructive. “If you villify them and put them in jail, no one will be left to clean up the mess.” If it seems Paul is missing something big in this analysis, remember: doesn’t really believe in competent government all that much.