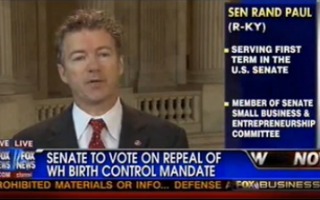 Paul explains that he sees this issue as being about far more than contraception or even simply a matter of religious freedom. Economic freedom, he said, also comes into play:

I think many Democrats are going to also vote with Republicans. I will vote to say that, yeah, this is a freedom of religion issue. You should not be forced to buy insurance that goes against your religious principles. But I would actually go one step further. ObamaCare really forces you to buy insurance that’s against your economic freedom. Should a 75-year-old woman have to buy insurance that has pregnancy coverage? Should a 23-year-old woman who’s had her tubes tied and has four children be forced to buy pregnancy coverage? So there’s an economic freedom issue, there’s a religious issue. But this goes to the heart of ObamaCare and why some of us are opposed to ObamaCare.

“The interesting thing about this is,” he continued, “if you force the employer to buy this insurance, they’re actually paying for something they find morally objectionable. But this has nothing to do with contraception. I have no objection to contraception, but I do have an objection to infringing on people’s religious liberty and their ability to decide what products to buy in the marketplace.”