Rand Paul Slams Obama’s ‘Faux Outrage’ About IRS: ‘Drunk On Power,’ Would Be ‘Wise’ To ‘Restrain Himself’
video

Rand Paul Slams Obama’s ‘Faux Outrage’ About IRS: ‘Drunk On Power,’ Would Be ‘Wise’ To ‘Restrain Himself’ 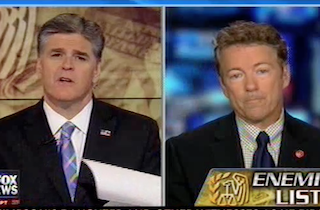 Paul noted that no one has yet been fired over the IRS scandal. “I’m afraid [Obama’s] going to do about as much as he did after Benghazi,” he elaborated. “The people who made decisions not to provide security were transferred temporarily, and they still work for the State Department. No one was fired. So it’s a bit of faux outrage, and I wonder what is the president is going to do.”

The senator went on to assert that targeting political groups is a firing offense. “When I think of this thing I think of what Lincoln said,” Paul later recalled. “He says, ‘nearly any man can be tested and maybe meet up to adversity, but if you really want to test a man, give him power.'”

To that point, Paul said Obama’s failing because “he’s supposed to be able to be wise enough to restrain himself but he’s using the power of government to investigate his enemies.”

“He’s tapping the phones of the press,” Paul continued. “And it turns out last year he signed legislation that allows him to detain an American without a trial and send them to Guantanamo Bay. This sounds like a president somewhat drunk on power, not cautious about how he uses the power.”