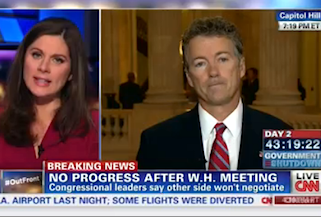 Immediately following statements from party leaders in the House and Senate on their Wednesday evening meeting with President Obama, Sen. Rand Paul (R-KY) joined Erin Burnett on CNN to speak for Senate Republicans on the state of negotiations with Democrats and the president as day two of the government shutdown comes to a close.

Paul began by insisting the Republicans are trying to “compromise” with the president but are not getting anything in return. “We started out with a position that we don’t want any Obamacare,” he said. “The president wants all of it, 100%. I would think a compromise would be both sides come off of their positions some.”

Burnett countered by reminding Paul that Democrats are offering a spending cap in order to come to a long-term agreement on the budget, asking, “Why isn’t that enough? It does seem like Obamacare is a bit of an obsession.”

Paul shot back that the Democrats are “defying what the normal history of compromise” has been in Washington. “Their intransigence really is keeping the government shut down.” He added later, “When we have a divided government, it means we have to get together and negotiate. The fact that they won’t negotiate I think really is untenable. I think they’re going to eventually have to talk to us.”

One aspect of this debate Paul refused to inject himself into was the growing divide between more moderate Republicans like Rep. Peter King (R-NY) and tea party conservatives like Sen. Ted Cruz (R-TX) over the tactics being used to demonstrate opposition to Obamacare. He instead chose to focus on the commonalities between all members of the GOP.

While he said “everybody” can admit that Republicans did not all agree on the “tactics,” Paul stressed that “on Obamacare, we’re absolutely united,” saying “it’s bad for America.” Despite that certainty, he said Republicans are willing to compromise. “That’s what the American people need to know,” he said. “We’ve been giving and giving and giving. The president is saying ‘My way or the highway’ and I don’t think that’s what the American people want.”

Finally, Paul insisted that when it comes to the debt ceiling, he’s for “taking default completely off the table.” He made a promise to the American people and Wall Street “that we will always pay the interest on the debt as a priority.”