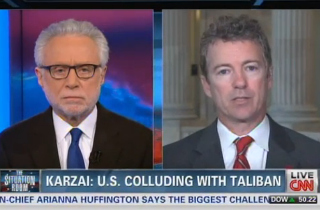 Appearing on CNN’s Situation Room this afternoon, Sen. Rand Paul (R-KY) urged that the United States bring its troops home from a costly war in Afghanistan, cut foreign aid especially to potentially hostile countries like Egypt, and take serious steps towards reforming entitlements and the tax code. He also said that, like his father Ron, he believes he can appeal to the youth vote and help make the GOP competitive in “blue and purple states.”

Reacting to the news that Afghan president Hamid Karzai believes the U.S. government is behind the latest series of Taliban attacks, Sen. Paul rebuked the comments as “disrespectful” and “troubling.”

“We’re asked to send our young men and women over there to lose their lives and we’re treated with disrespect by our allies, so find it very troubling,” he told host Wolf Blitzer.

Asked what sort of withdrawal schedule he desires, the libertarian-leaning senator flatly said, “We’ve been there nearly 12 years. I think it’s time to come home,” adding that an expedited timetable would have to be formed in conjunction with the generals involved in the process.

Sen. Paul, who has previously spoken out against the U.S. government providing billions of dollars in aid to foreign countries, also tore into “disgraceful” calls for America to send over $250 million in monetary support to the Egyptian government.

“We have no White House tours right now, but they’ve got $250 million to give to Egypt?” he said. “I can tell you that people are outraged when I talk to working-class people and they find their taxes are being sent to a country that burns our flag and chants ‘Death to America.'”

When the topic turned to domestic spending issues, Paul said he’d like to tell President Obama that “he could go down in history as a great leader” if only he would reform costly entitlement programs. “It’s really just math,” he explained. “Nobody really wants the changes but, mathematically, you can fix Social security by gradually raising the age and means testing the benefits. Meaning rich people get a little less benefits than they currently get.”

Towards the end of the segment, while discussing his potential 2016 presidential run, Sen. Paul said that “the red states are getting redder but the purple and blue states are leaving us behind,” and so he believes he has the potential to help the party become competitive in California and New York by appealing to youth as his father, former Rep. Ron Paul (R-TX) did for so long by “standing on principle,” especially over civil liberties issues.