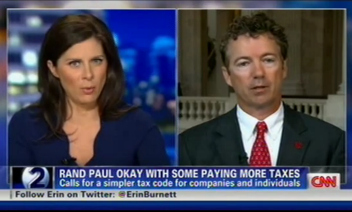 On Tuesday’s edition of CNN’s OutFront, Senator Rand Paul (R-KY) told host Erin Burnett that he would “absolutely” be alright with the wealthy paying a little more in taxes. Of course, Sen. Paul didn’t mean it in the way that liberals do — that the rich should pay more in taxes — but that he’d be okay with some wealthy people paying more money after the tax code is simplified and all loopholes are closed.

Burnett asked the senator whether he sees Tuesday evening’s Scott Walker recall victory as a mandate for Washington to “go for more cuts on pensions and Medicare and entitlements,” to which he replied:

I see none of it that I am jumping up and down to do. Social Security, I don’t see it as my mandate to say I want to make everybody wait longer; I see it as something I have to do to save the system because we have a huge population of Baby Boomers. We are living longer. There is about two-and-a-half workers for every retiree. It is not a mandate to get what I want; it is that I see that we have to do this or Social Security will drown under a mountain of debt.

Part of the senator’s solution for entitlements includes means-testing for Medicare so that the wealthy don’t receive payouts. “Similarly,” Burnett asked, “are you also for closing loopholes in the overall tax system that would end up with the wealthier in this country paying more? It would be an effective tax increase. Are you for that?”

I’m for a simple tax code. My five-year balanced budget has one rate: 17% for corporate, 17% for private, and it has almost no deductions. You fill it out on one page and then there wouldn’t be special deductions; no individuals paying no taxes and no companies paying no taxes. But there would be no companies paying 35% income tax, which is twice what the rest of the world is paying. We are losing companies overseas because we are the highest tax rate in the world. That has to come down.

Burnett, seemingly unsatisfied with his initial answer, pressed him on the more “intellectual” point, asking him if he is “all right with some people, all in all, may end up paying more than they are paying now. You get a simpler tax code and a simpler rate, but they could pay more.”

Satisfied, Burnett said goodnight to the senator, and then said to her audience, “Important point there. Many Tea Party people coming on this show and saying they are willing, on the Tea Party side, to have people pay more, the wealthiest of this country. We should be able to get a grand bargain.”

It’s important to note that the senator’s point is much more nuanced than Burnett presents it: these “Tea Party people” do not advocate that the wealthiest Americans should pay higher taxes, as a matter of fairness or equity. They are also not saying that they would at all favor a “Buffett Rule”-like surtax on millionaires.

Sen. Paul’s point is rather simple: if we simplify the tax code, most rates will actually go down, and taxes will be less of a burden for everyone. But, with all loopholes closed, some of the wealthiest Americans may, indeed, pay more than they are currently paying now. That’s not an issue because it means ending the tax loopholes that effectively act as government subsidies to those taxpayers lucky enough to decipher the proper deductions.