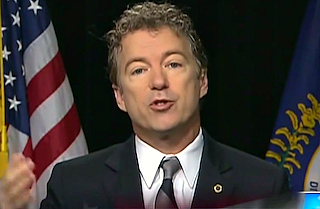 Senator Rand Paul (R-KY) spoke to Fox News Sunday’s Chris Wallace about his economic plan for Detroit, and the coming expiration of unemployment benefits for 1.3 million people at the end of the year.

“I do support unemployment benefits for the twenty-six weeks that they’re paid for,” Paul said. “If you extend it beyond that, you do a disservice to these workers.”

“There was a study that came out a few months ago, and it said if you have a worker that’s been unemployed for four weeks and on unemployment insurance and one that’s on ninety-nine weeks, which would you hire?” Paul continued. “Every employer, nearly 100%, said they will always hire the person who’s been out of work four weeks. When you allow people to be on unemployment insurance for ninety-nine weeks, you’re causing them to become part of this perpetual unemployed group in our economy. While it seems good, it actually does a disservice to the people you’re trying to help.”

“My economic stimulus plan for Detroit would leave over a billion dollars in Detroit’s economy and would stimulate Detroit,” Paul replied. “There is no other plan on the table. And there’s not going to be some grand bailout that’s going to go through Congress. Other than my plan, if my plan would pass—I think it’s the only one that politically could pass—over a billion dollars would be left in Detroit. I’m also talking about restoring voting rights. I’m talking about school choice. I think there’s a lot to offer in the Republican message that hasn’t been offered in the past. And I think there’s only upside potential for voters in Detroit, or all the big cities, for Republicans.”