Rand Paul to MSNBC Host: ‘When Your Network Does 24-Hour News Telling the Truth,’ Then We Can Talk
video

Rand Paul to MSNBC Host: ‘When Your Network Does 24-Hour News Telling the Truth,’ Then We Can Talk 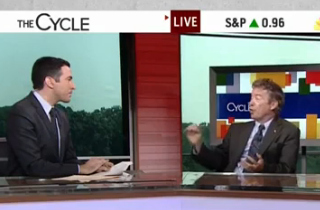 Sens. Rand Paul (R-KY) and Cory Booker (D-NJ) brought their bipartisan push for criminal justice reform (a noble cause, if you ask us) to MSNBC’s The Cycle on Wednesday afternoon.

While the conversation was mostly cordial and illuminating, it took a brief turn for the tense when Ari Melber found a way to bring up Sen. Paul’s controversial 2010 comments to Rachel Maddow about the Civil Rights Act.

Directly after the libertarian-leaning senator made the case that prison reform is a civil rights issue, Melber transitioned: “As we’re talking about restoring civil rights here, you stirred up a lot of controversy with the 2010 comments, [in which]
you said at the time that you had concerns about the rules for private business while you support most of the Civil Rights Act. Why did you evolve on rules for private business?”

Paul expressed he felt unfairly treated by MSNBC over this topic:

What I would say to be fair to myself, because I like to be fair to myself, is that I’ve always been in favor of the Civil Rights Act. People need to get over themselves writing all this stuff that I’ve changed my mind on the Civil Rights Act. Have I ever had a philosophical discussion about all aspects of it? Yeah, and I learned my lesson: To come on MSNBC and have a philosophical discussion, the liberals will come out of the woodwork and go crazy and say you’re against the Civil Rights Act, and you’re some terrible racist. And I take great objection to that, because, in Congress, I think there is nobody else trying harder to get people back their voting rights, to get people back and make the criminal justice system fair. So I take great offense to people who want to portray me as something that I’m not.

Melber pressed on: “But when you said, well, here’s where the rules for private businesses are concerning, why not explain that you’ve evolved on that?”

The senator replied that he has been attacked by “half-a-dozen people on your network trying to say I’m opposed to the Civil Rights Act,” while he’s never actually opposed the law. “I’m not willing to engage with people who are misrepresenting my viewpoint on this,” he said. “For people to say that, really, they don’t want to have an honest discussion about it.”

And Melber continued again: “I think the honest discussion is that you said some title of it, Title II and Title VII, that relate to it…”

With Sen. Paul interrupting: “The honest discussion of it would be that I never was opposed to the Civil Rights Act and when your network does 24-hour news telling the truth, then maybe we can get somewhere with the discussion.”