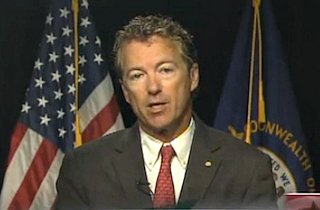 Kentucky Senator Rand Paul appeared on Fox News Sunday and told host Chris Wallace that the Obama administration was involving the United States in a conflict in Syria in which there were no U.S. interests at stake, and that the U.S. should refrain from involving itself unless victory was the goal.

“If you talk to our young soldiers, men and women who are fighting and who have volunteered, they’re willing to fight for America, but they want it to be a real clear-cut American purpose, and that we’re going to win,” Paul said. “They don’t want to fight for stalemate. President Obama wants stalemate. He doesn’t want victory. And if you’re not going to fight victory, we should never be involved.”

Paul also said that attacks upon Syria’s chemical weapons stash could result in the chemicals falling into the wrong hands.

“If we get involved in Syria, it’s more likely to create instability,” Paul said. “There’s a chance that [Assad] is more emboldened if we do attack him. The worst case scenario is if the stockpiles of sarin gas begin to move about the country, and maybe they go to Hezbollah and they go into Lebanon, and become more of a threat to Israel. I think that is more likely to happen if we attack Assad.”

“This administration won’t even react when Americans are killed in Benghazi,” Paul continued. “They’ve done absolutely nothing. Here’s a situation in Syria that doesn’t involve Americans, and they want to get involved. To me they’ve got it backwards.”

“I’m not an isolationist,” Paul responded. “I do believe in intervening when American interests or national security is threatened.”