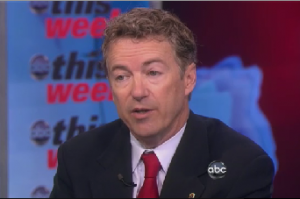 This morning on ABC’s This Week, host Christiane Amanpour interviewed the new Senator-elect from Kentucky, Rand Paul, about his plans once he takes office. Perhaps not surprisingly, Paul’s vision focused primarily on cutting spending and reducing the national debt. In a departure from the Republican party line (and general tone of cooperation), however, he said he believes cutting spending from defense is a viable option for helping to reduce the national debt.

Paul: Bottom line is, you have to look at everything across the board. “Now can we say we gradually don’t need as large of an Army if we’re not in two wars? Yes, I think you can say that. You can save money there. You can bring some troops home.
[…]
Amanpour: “Does the Tea Party have a foreign policy?”

Paul: “Our party believes in having a strong national defense, that it’s a priority for the country…but no, primarily the Tea Party is about the debt.”

And I told you where the compromise is. The compromise is, Republicans never say they’ll cut anything out of military. What I say is, national defense is the most important thing we do in Washington, but there’s still waste in the military budget. You have to make it smaller, but you also then need to address, how many wars are we going to be involved in? Are we going to be involved in every war all the time?

One wonders how this line of argument (or compromise, as the case may be) will go down with the GOP establishment. Watch below.