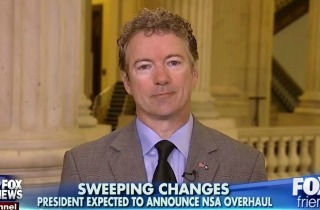 Appearing on Fox & Friends on Tuesday to react to President Barack Obama’s plan to alter how the National Security Agency collects domestic metadata, Sen. Rand Paul (R-KY) said he thinks that he deserves some of the credit for forcing this change of doctrine with his lawsuit against the administration.

“I don’t want to take all the credit for this, but I think our lawsuit had something to do with bringing the president do the table,” Paul asserted. “The interesting thing is he unilaterally instituted this program without congressional authority. Now, he’s saying he has to wait for congressional authority to undo it.”

“I think he could unilaterally stop the program if he were serious about it,” Paul said. He added that he is uncomfortable with communications providers collecting data on their customers that they can provide to the government without a warrant.

“The president sometimes says one thing and does another, so the devil is in the details here,” Paul added.

RELATED: Rand Paul Caught Up in Accusations of Plagiarism Again over NSA Lawsuit

Asked if he believes the intelligence community is concerned about losing this tool, Paul said that he is “not sure whether to believe them.”

“You have the CIA illegally searching congressional computers, giving access and then removing access, and I really think that there needs to be an overall investigation of the intelligence community,” Paul asserted. “I think there is a certain amount of arrogance here that needs to be checked.”