Rape Is Rape: Paul Ryan Runs Away From His ‘Forcible Rape’ Telltale Heart 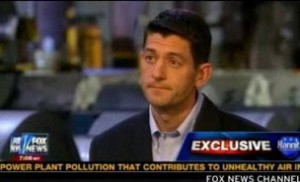 This week’s Todd Akin-quake has thrust Republican vice-presidential candidate Paul Ryan‘s reprehensible views on abortion and rape (views that are shared by almost all of his legislative colleagues) into the spotlight. His attempts to create separate categories of rape, “forcible” and…otherwise?, have proven to be so toxic that Ryan, in an interview on Wednesday, was reduced to covering his ears and quoting President Obama. Crack Ryan-buster Rachel Maddow challenges the national media not to let him do it.

Rep. Todd Akin’s multiple attempts to explain what he meant when he said victims of “legitimate rape” couldn’t get pregnant have ensnared vice-presidential nominee Paul Ryan in a trap of his own making. Ryan co-sponsored a bill with Akin (and almost every other GOP House member) that would have sought to redefine a rape exception to the federal ban on funding for abortion to include only cases of “forcible rape” and incest.

But as NBC News’ Kelly O’Donnell reported yesterday, this was not a one-shot, go along with the crowd deal:

That proposed amendment was blocked in what was a Democratic-controlled House Ways and Means Committee. Ryan and only one co-sponsor, Rep. Sam Johnson of Texas, proposed a change to health-care legislation that would have required health insurance cover abortion services.

The Ryan-Johnson failed amendment did specify limited exceptions, permitting abortion coverage including when the life of the mother is at stake and in line 16 of the proposed text “… unless the pregnancy is the result of an act of forcible rape or incest.”

O’Donnell goes on to report that Ryan co-sponsored a third measure containing the “forcible rape” language.

Now, the notion that the “forcible rape” language is reprehensible is, of course, a matter of opinion. There is obviously some sort of logic to it, a logic that these measures never spelled out. As O’Donnell notes, it could be a way to exclude statutory rape, “which involves a minor unable to legally consent or a person who lacks mental capacity for legal consent.”

That means that if a 42 year-old man impregnates a 10 year-old girl, unless that man was her father, Paul Ryan reasoned that there was some level of consent, that the little girl kinda deserves what she got. It’s cold, but it makes sense within its own parameters, within the assumption that little girls actually can consent, to some degree (to the degree necessary to take responsibility for the outcome), to sexual intercourse. That’s one possibility.

Another possibility is the one Rep. Akin laid out for Dana Loesch, that a “legitimate rape,” which he says was meant to come out as “forcible rape,” is a designation that eliminates false rapes. Perhaps Ryan’s reasoning was that, unless a woman can show serious physical injuries, or other evidence of force, like a weapon or ligature marks, then she could be lying, and probably is. We all know how women love to go around bragging about being raped, social enhancer that it is. Again, it’s cold, but within its own assumptions, it makes sense.

Then, there’s the possibility that Ryan’s logic included the calculation that, even if a woman is attacked, if she fails to sustain sufficient injuries, maybe she secretly enjoyed it. Just a little.

It’s also possible that Paul Ryan relied on all three of these rationales, or some combination of them, when he co-sponsored all those “forcible rape” bills.  What’s not possible, though, is that Paul Ryan believed that “rape is rape” when he co-sponsored and supported those “forcible rape” provisions, and Rachel Maddow is absolutely right, the media has a duty to make sure Ryan can’t pretend that he did. Like Edgar Allen Poe‘s Telltale Heart, the words “forcible rape” should echo in Ryan’s head from now until he explains himself, until he tells us whether he believes little girls can consent to sexual intercourse, or that women are naturally prone to lying about rape, or that some of them secretly enjoyed the rape, or all three.

Since that telltale beat is unlikely to come from Paul Ryan’s conscience, it’s up to the media to be his conscience.