Rapper Chuck D. On CNN: ‘Since Reagan And Bush, There’s Been Nothing But Guns And Drugs In The Black Community’ 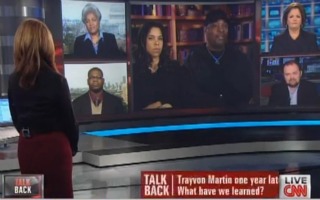 Hip hop artist Chuck D., famous for his work with the group Public Enemy, appeared on CNN with Carol Costello to discuss the impact that the slaying of Trayvon Martin had on the nation one year later. Chuck D. told Costello, that when he was growing up, there were no guns in the black community. However, after 1980 and the rise of the Ronald Reagan/George Bush-era, he says that “there’s been nothing but guns and drugs in the black community.”

Costello asked Chuck D. for his thoughts on the killing of Martin. “One man had a gun and one didn’t, and we’re going on a story that this man is telling everybody,” Chuck D. said.

“The bottom line is this: back when I was growing up, you couldn’t find a gun on anybody,” he continued. “Since 1980, the beginning of R&B, Reagan and Bush, there’s been nothing but guns and drugs in the black community for the last 30-some-odd years.”

Chuck D. added that this period saw the beginning of a dramatic increase in the incarceration of black males. “And nobody seems to give a clear answer,” he continued. “Race is America’s folly.”

When asked for his thoughts on the Martin murder case, New York Times conservative columnist Ross Douthat said he thought “we should have a trial.”

“It might be helpful for everybody commenting on this case to watch the trial unfold, and see how the evidence is presented, and come to conclusions that might be somewhat more informed than the conclusions we’ve been making for the past year on the basis of selective leaks from both sides,” Douthat added.

Later in the segment, Costello equated the Martin murder case to the murder trial of O.J. Simpson. She said that “everybody, like, knows, pretty much, that O.J. Simpson is guilty of that, but that trial didn’t prove much.”