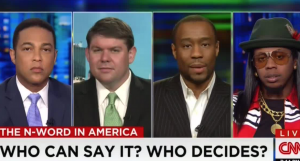 Rapper Trinidad James appeared on CNN tonight for a lengthy discussion over the n-word that culminated in James clashing with conservative guest Ben Ferguson over the use of the n-word and whether rap artists are profiting off it. James first spoke with Don Lemon and said he’s not terribly concerned with the SAE frat mother who dropped the n-word several times while singing along to one of his songs.

But the real fireworks began when Ferguson and Marc Lamont Hill joined in the second segment. Hill backed up James to say that rap artists get undue “burden and pressure” to stop saying the n-word when filmmakers like Quentin Tarantino don’t get the same treatment.

Ferguson confronted James about the “divisive” nature of the word and said rappers are “afraid that they’ll lose out on money and sales” if the n-word goes away. He even told James, “You’re making money off it!” James shot back that he’s giving the n-word too much power, arguing that he gets money from his music and creativity and not the n-word alone.

Ferguson even told James that the n-word is the only reason he’s on the show. Hill piped up that he’s actually on the show because a white woman used the n-word first, and also that “white people were saying the word nigger before Trinidad James was born.”

You can also watch James and Lemon one-on-one here, via CNN: