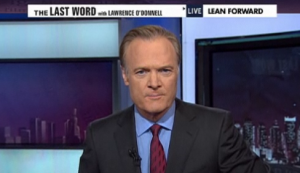 On a week marked by a huge international story–and hefty NBC resources committed to telling it–MSNBC marked an unpleasant milestone, dropping to third place across primetime on February 1. In perhaps the most striking defeat for the network, Lawrence O’Donnell, who took over for the departed Keith Olbermann was soundly defeated by CNN’s Parker Spitzer, a show assumed by many to be such a poor performer as to be on the chopping block.

MSNBC’s Ed Show, which relocated to 10 p.m. in the new lineup, was nowhere near CNN’s AC 360. Cooper, who’s on assignment reporting from Cairo, led with 344,000 to Ed Schultz‘s 180,000. Cooper has taken an all-in strategy on the Egypt story, immediately flying from New York last week and beginning live coverage over the weekend. Cooper has reported extensively on all CNN programs (and CNN International) and presumably driven viewers to his nightly show. AC360 was the network’s only show to move within striking distance of ratings leader Fox News, closing to within 39,000 viewers of timeslot winner Greta Van Susteren.