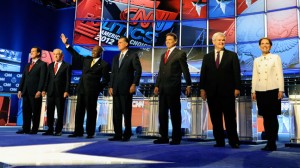 Last night’s Republican debate gave CNN a ratings win last night, with a very impressive 5.5 million people tuning in. The big numbers translated to increased viewers across CNN’s entire evening slate of programs, but the build-up to the debate didn’t garner Erin Burnett a win as the lead-in — she finished third in the 7 p.m. time-slot, behind Shepard Smith and Chris Matthews. The debate did, however, almost double Burnett’s numbers from Monday night, bringing her from approximately 330,000 viewers to 636,000. Will the extra exposure translate into more viewers sticking around permanently? Find out tomorrow.