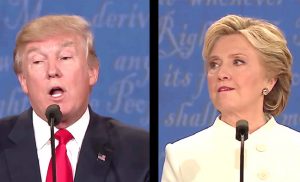 Early preliminary numbers for last night’s third and final presidential debate of this election cycle reveal that more people tuned in than for the St. Louis debate but not as many for the first one.

According to The Hollywood Reporter, the overnight rating across the broadcast networks was nearly 40, exceeding the second debate by at least a couple points. Of course, the St. Louis town hall had to contend with Sunday Night Football, with NBC not showing it.

Early numbers for the final presidential debate on Wednesday night show an atypical gain from the previous face-off with a 39.7 overnight rating, according to Nielsen.

The overnight rating for Wednesday’s face-off is lower than the first debate between Donald Trump and Hillary Clinton on Monday, Sept. 26, which scored a 46.2 overnight rating across seven networks (ABC, CBS, NBC, Fox, Fox News, CNN and MSNBC). But higher than the second face-off on Oct. 9, which came just days after the release of the infamous Access Hollywood tape and pulled in a 37.2 overnight six networks. (NBC was showing Sunday Night Football during the second debate.)

This morning, CNN’s Brian Stelter discussed the debate ratings, stating that conventional wisdom was that this debate would drop below the second one’s due to election fatigue. He noted that there was no football game competing with it, but there was a playoff baseball game.

The debate ratings are in and it's official a lot of people were watching. @brianstelter breaks down the numbers. https://t.co/ND6bb7LeKq

Per THR, the first debate pulled in a total of 84.4 million viewers and the second one had 69 million people who watched it.

Watch the clip of Stelter above, via CNN.