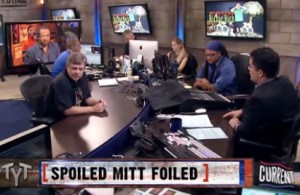 He’s been a moisture farmer, a womp rat assassin, a Jedi Knight, and now, apparently, an honorary Young Turk. Sushi Girl star and Star Wars alum Mark Hamill paid another visit to the Mos Eisley cantina that is The Young Turks Wednesday night to lend his light saber wit to a panel discussion of the aggression that was on display at Tuesday night’s debate. While he loves a good old fashioned cantina brawl, Hamill thought Mitt Romney went too far, saying his tactics were “almost like harassment,” and “bullying of the highest degree.”

After blasting Republican presidential nominee Mitt Romney last week, Mark Hamill was back on The Young Turks for a discussion of Tuesday night’s debate, in what will hopefully become a recurring segment. Unless Hamill has a “no Star Wars bits rider,” though, the Turks are passing up a golden opportunity for some awesome cosplay. They could let the viewers decide whoh wears the Princess Leia getup. I’m just sayin’.

Host Cenk Uygur began by playing a clip of President Obama’s quip about Romney’s “pension,” adding “I like that burn from the president,” and asking producer Jayar Jackson who got the better of the exchange.

“It seemed to me like he was preparing for President Obama to come with a more aggressive..so he’s thinking I need to become aggressive to because that worked for me the first time,” Jayar observed, but added that “Now he’s the angry white guy, who’s trying to control the conversation, and its the same problem he had before.”

“I think it might have been a bit of over-preparation for trying to neutralize Obama’s different aggressive attitude,” Jayar concluded.

Cenk then played a clip from the debate exchange over gas prices, in which Romney harangues the President about drilling on federal lands. Although this segment was about the style, not the substance, it’s worth noting that Romney was wrong on the substance. Romney said “we’ve had four years of policies being played out. And the president’s right in terms of the additional oil production, but none of it came on federal land. As a matter of fact, oil production is down 14 percent this year on federal land, and gas production was down 9 percent.”

The fact is that oil production on federal lands is up an average of 10.6%, and the one-year drop Romney cites wasn’t this year, it was for 2011. Now, why would that have happened?

On the style, Hamill said that “I’m not one for great decorum. I love the idea of an open debate like in France, where they stand at a podium, there’s no moderator, they just go at each other for a predetermined amount of time.”

“But this sort of repeated, it’s almost like harassment,” Hamill continued, “The president’s trying to get his answer together, and [Romney interrupts] because it’s not coming fast enough for the CEO. He says it again and again… It’s arguably disrespectful. Patronizing beyond all belief.”

“It almost seemed like.. I wanted to say to him, ‘He doesn’t work for you,'” Cenk said, later adding “Overall, I’m with Mark, I want a free for all. He just came off looking bad on that one.”

“Give the guy a chance to get a word out,” Hamill said. “If it didn’t come out exactly how he wanted it to sound, he again repeats the question over and over. It’s bullying of the highest degree, to me.”

Most of what they said was true (especially Jayar’s insight about over-preparation), but supporters of the President are too quick to invoke bullying here. This was a prizefight, and you can’t “bully” someone in a prizefight. Romney’s performance was more akin to one fighter spitting on another; disrespectful, small, and ineffective. President Obama gave better than he got Tuesday night, and in the end, all Mitt Romney ended up spitting was his own teeth.