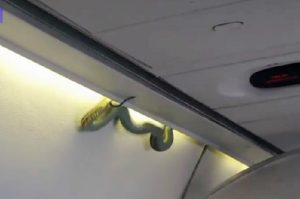 In a scene imitating the 2006 cult classic Snakes On A Plane, a commercial flight had to make an emergency landing in Mexico after a large serpent was found slithering out of an overhead compartment.

According to ABC News, passenger Indalecio Medina shot video of the snake along with ceiling of the cabin near a window.

He stated that he was able to control the snake with a blanket once it dropped from the ceiling. The Aeromexico flight was then given priority landing in Mexico City so authorities could handle the animal.

WATCH: Snake on a plane! A large snake falls from overhead in the middle of an Aeromexico​ flight: https://t.co/5MqEWN684E pic.twitter.com/DmsxGRvyon

In a statement, the airline said it was checking to see how the snake got on the plane:

“The procedures carried out for this flight are currently being evaluated to determine how the animal entered the cabin and measures have been taken to avoid such incidents in the future,” Aeroméxico added. “For Aeroméxico, the security of its passengers and crew is of the highest priority and it always works to meet the highest quality standards.”

Of course, after the news hot, many took to Twitter to make the obvious comparison to the Samuel Jackson starrer.

Bruh SNAKES ON A PLANE in real life?? https://t.co/Al7A5ZrOt8

No matter how your Monday has gone, at least you didn't experience snakes on a plane. https://t.co/e7ZYtko6pL

Snake on a plane! Really. https://t.co/NUyLu1k7KA

Watch the clip above, via ABC News.