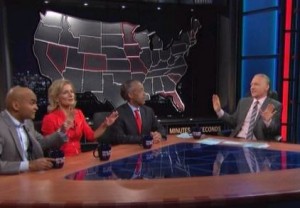 If you were looking for a sign of just how divisive American politics is, look no further than the widespread Republican distaste for Clint Eastwood‘s Super Bowl ad for Chrysler where the famously conservative anti-bailout Hollywood star may have covertly been endorsing President Obama‘s reelection. On Real Time tonight, Bill Maher and panel took on the ad and the whole issue of auto bailouts, as if this was 2009 all over again.

RELATED: Watch: Obama On GM: ‘The American Auto Industry … Is Once Again On The Rise’

Maher played a clip of the ad, admitting his admiration for Eastwood, and found the whole controversy stunning, but wanted to know why conservatives still insisted the auto bailouts were a mistake? This set off panelist Reihan Salam, who went down a laundry list of criticisms he had with the bailouts, claiming the money given to the companies has now “evaporated.” He argued that there were plenty of other industries that could have benefitted from the money, but Maher argued car companies like GM are “America’s signature industry” and it was right to bail them out.

Economist editor Zanny Minton Beddoes admitted that while her publication was not one to normally endorse government intervention, it was the right course of action to take because otherwise the car companies “would have been liquidated,” which would then result in massive job losses. Al Sharpton compared the bailout to a doctor administering medicine, and if the patient is still alive at the end of it, it would be a waste of time to keep arguing what other types of medicine could have saved him.

Salam shot back that the only reason they were helped when coming face-to-face with bankruptcy was that these companies had political connections they used to get Washington on its side. Beddoes insisted the bailouts were necessary to keep the recession from turning into a depression, but Salam was having none of it. He insisted money was being thrown into these companies “to shape the political environment” and the whole thing was an example of crony capitalism. Maher suggested that Obama giving out the money with “strings attached” was a positive, when compared to George W. Bush.

Watch the sparks fly below, courtesy of HBO: