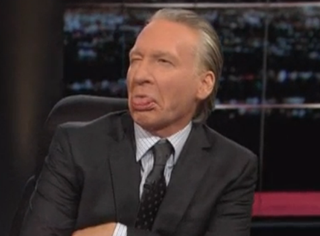 Bill Maher tried to capture what he saw as the Republican reaction to President Obama’s State of the Union address this week with words, calling Republicans “sourpusses” and describing their reaction as “unprecedented.” But he only truly captured what he was trying to say by making this face– at once childish and elderly– as his panel descended into disarray, with Rep. Dana Rohrabacher trying to explain his party’s attitude and Kennedy making the point that parties don’t matter, while a mum Martin Bashir looked on.

RELATED: Bill Maher Wants To Know: ‘Who The F@#k Is Saul Alinsky?’

Wouldn’t it be in your self-interest to fake it?” Maher noted, suggesting Republicans should at least smile through uncontroversial points in the speech, like the fact that the American auto industry was doing slightly better. Rep. Rohrabacher tried to explain that the President “talked about every issue you can imagine, and he was on every side of every issue.” This ignited a crosstalk-off with Kennedy, into which, once in a while, Maher would try to jump by suggesting the use of “facts.” It went on this way for some time until the Congressman asked if he could “get a word in,” which Maher used as an opportunity to let Bashir talk.

Kennedy jumped in one more time to end on a conciliatory note, though, so not all was lost: “it doesn’t matter if it’s this president or the next one– they’re all figurehead douchebags.”