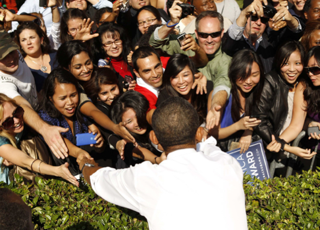 “You take a young Bill Maher and you take a young Ann Coulter, what really happens if they live together?” Doron Ofir, the casting directory behind Jersey Shore, wants to know the answer to this question. Ofir is currently casting for a reality show titled Party Politics, the premise of which is to gather a group of attractive young people to live in a house and… talk about politics?

Ofir, who is a veteran of the reality television world, is hoping Party Politics will be the breakout show of the 2012 election season, told Fox News he is looking for “the hottest politicos [ed. note– oxymoron?] in the USA… intelligent 21 to 35-year-olds who have had a little life experience and education and can argue their beliefs, and have the knowledge to back up the debate.” The idea is to have these young people confronting each other constantly about their beliefs (hence adding the classic reality TV show drama element), but instead of yelling about where one house member put the other’s shoes, it will be a substantive debate on issues that drives the plot.

So the program sounds nothing like Jersey Shore— more “like something between C-Span for cool kids crossed with Politically Incorrect without a moderator.” Given that the 2012 election in itself, with its near-weekly debates and the affinity one develops for the characters as the months role along, is already looking a bit like a reality show itself, they may not be all that farfetched an idea– and there is certainly a larger audience of political drama consumers today thanks to cable news than there has been anytime before.

Care to try out yourself? Party Politics is accepting online applications here.