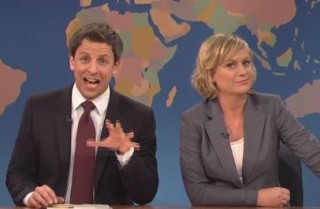 For what might very well end up being Seth Meyers‘ final night anchoring the “Weekend Update” desk for SNL, his former castmate and co-anchor Amy Poehler returned to deliver their faux-incredulous “Really?!” newsreading segment.

Using their well-known “really?!” tagline, Poehler and Meyers mocked everything from the IRS’s unpopularity and scandal-ridden week (“The government only keeps you around to make the DMV look good”) to Obama finding out about the controversy by watching it unfold on television (“I don’t want to live in a world where you have the same sources as my aunt”).

They also went after the tea party for being “surprised” that they were targeted by the IRS, given that they named themselves after people who proudly and historically violated tax laws.

After “Really?!” ended, Poehler decided to stay on for more one-liner news stories, including “A restaurant in San Francisco called Bacon Bacon has been ordered to close after neighbors complained about the overwhelming smell of bacon. Which is not an easy thing to complain to the cops about.”

Meyers is set to take over Jimmy Fallon‘s hosting gig on NBC’s Late Night in early 2014. Reports indicate Meyers will continue as an SNL cast-member in the fall, but it is unclear whether that will include anchoring the “Weekend Update” desk.

Watch the full segment below, via NBC: