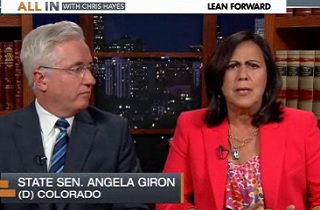 The horrific mass shooting at the Washington Navy Yard has reignited, to some degree, the debate over gun regulation, but the still-unfolding facts around the tragedy have been confounding to news media and political figures as well. Early reports that shooter Aaron Alexis used an AR-15 turned out not to be true, detracting from gun control arguments pinned to them. On Tuesday night’s All In, recalled State Sen. Angela Giron (D-CO) similarly pegged her takeaway from the shooting to the idea that Aaron Alexis “would probably not have passed a background check” to buy a gun.

Host Chris Hayes interviewed Colorado State Senate President John Morse (D-CO) and State Senator Angela Giron (D-CO), who were defeated in a special recall election last week, which was spurred by that state’s enactment of a raft of gun regulations, including a 15-round limit on magazines and universal background checks. They discussed their disappointment with the recall result, their pride in the laws they enacted, and their determination to continue the fight against the gun lobby.

However, at one point, Hayes asked Giron and Morse to respond to the devil’s advocate argument that, in order to get any sort of gun regulation passed, “it has to be fairly tailored and fairly marginal around the edges,”and that “perversely, advocates of maximum gun rights turn around and say that’s not going to stop a person who’s intent on doing harm. What do you say to that argument?”

Giron replied that “In fact, we know that in this particular case, that this man who went and gunned down people would probably not have passed a background check had he went to purchase some firearms.”

She added that “There is no perfect law, but certainly, universal background checks, which 90% of Americans agree to and believe in, as well as 60-some percent of NRA members. And limiting magazines, we know that in some of these shootings and these massacres, these huge rounds, 100-round magazines, that when they jam, it really gives them opportunities. So we do know it can make a difference.”

Every one of Giron’s points is solid on its own merits, but the only thing anyone will remember about this clip is that she said Alexis wouldn’t have passed a background check to buy a gun, when there’s extensive reporting that he actually did pass a federal background check:

On Saturday, Mr. Alexis bought the Remington shotgun and ammunition at the gun store and range in Lorton, Va., Sharpshooters Small Arms Range, where he also rented a rifle and practiced with it, according to a lawyer for the store.

The lawyer, J. Michael Slocum, said in an e-mail that Mr. Alexis bought a Remington 870 Express 12-gauge shotgun and about two boxes of ammunition, or about 24 shells. The purchases were approved after the store owner conducted the required federal background check, Mr. Slocum said.

“After the terrible and tragic events at the Navy Yard, the Sharpshooters was visited by federal law enforcement authorities, who reviewed the Range’s records, including video and other materials,” Mr. Slocum wrote. “So far as is known, Mr. Alexis visited the Range only once, and he has had no other contact with the Range.”

The Virginia State Police said Tuesday that Mr. Alexis had passed all state and local background checks to buy the shotgun.

Had Giron known that, or had Hayes corrected her, then a very effective argument could have been made that this case clearly demonstrates the need for a more comprehensive background check system, which it most certainly does.

That same New York Times report does provide a modicum of vindication for those whose main argument about the AR-15 is that it is sought by mass shooters. Alexis reportedly tried to buy one on Saturday, but was prevented from doing so by a state gun law:

The gunman who killed 12 people at the Washington Navy Yard on Monday test-fired an AR-15 assault rifle at a Virginia gun store last week but was stopped from buying one because state law there prohibits the sale of such weapons to out-of-state buyers, according to two senior law enforcement officials.

If Alexis had been able to purchase that AR-15, along with high-capacity magazines, the death toll on Monday could have been much higher.

You can watch the entire segment here.