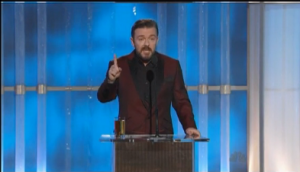 So. Where were we? Comedian Ricky Gervais gave hosting the Golden Globes another whirl this weekend and, despite fears from many a media blogger and NBC exec, not a single starlet’s weave was set ablaze, and no actor was sent crying into the arms of a waiting momager.

The night started off with Gervais, fresh off his shift at the funeral home, walking onstage to a waiting glass of what appeared to beer. “Cheers,” he told his glittering, hollow-eyed colleagues. “So. Where was I?”

RELATED: Ricky Gervais Is As Wicked As Ever In His Return Golden Globes Monologue

Gervais’ jokes seemed, at first, to be characteristically biting and acerbic, with Gervais taking a well-aimed jab at NBC’s ratings, and even at the awards themselves (they’re “just like the Oscars,” he said, “but without all that esteem.”) But they very soon turned flaccid as the comedian fixed his sights on two of pop culture’s most heavily battered punching bags: Justin Bieber and Kim Kardashian™. Now, these are particularly trying times for comedians — they have to make sure their jokes haven’t already been told roughly 65,872 times on Twitter. That’s not going to happen if you go after people whose names have practically become shorthand for the more absurd, excessive, or nihilistic aspects of pop culture. Of course, you can always then try to throw your audience off their feet by introducing a Norbit joke. They’ll never see it coming, and likely won’t even notice when it has left.

Things picked up again when Gervais poked fun at the rules set forth for him by the Hollywood Foreign Press, proving that the man is at his best when he’s commenting on the absurdity of institutions and attitudes rather than focusing in on celebrities, who generally make for too easy and too obvious a target anyway. Instead of making fun of the Golden Calf’s cankles or its homoerotic tendencies, take the whole damn thing down.

To drive home this disconnect, Gervais turned on Kardashian and Bieber yet again (but at least had the presence of mind, this time, to include a joke about underage turkey basting) before taking another jab at NBC for its status as a “non-profit.”

RELATED: Madonna Hits Back At Ricky Gervais, Calls Him ‘A Girl,’ Invites Him To Make Out With Her

Two of the funniest parts of the nights, other than Matt LeBlanc’s win, were Johnny Depp and Madonna’s reactions to Gervais. Hollywood is like a DC where everyone looks like Romney and Huntsman — every move is political, every interaction carefully calculated. So to see a bit of (probably very well rehearsed) spontaneity and authenticity break through from underneath so many layers of affected accents was refreshing. Johnny Depp looked like he might want to reenact Sweeney Todd right there on stage, and Madonna nearly made up for giving us Lady Gaga by hitting back at Gervais’ truly awful “like a virgin” quip.

“If I’m still just like a virgin, Ricky” she said sweetly, “then why don’t you come over here and do something about it. I haven’t kissed a girl in a few years.”

Of course, the very funniest part of last night’s show were the Tweets of those watching along at home. Here were some of my favorites: 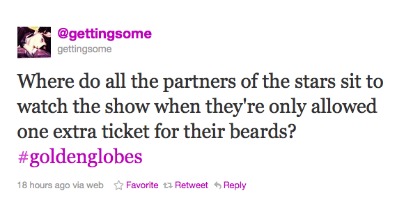 Now, I like Gervais’ work. I find his stand up very funny and the original version of The Office is, truly, nothing short of comedic brilliance. But maybe hosting an awards show just isn’t conducive to Gervais’ particular brand of humor. I mean, sure, it was no Franco and Hathaway, my ears didn’t bleed as I grasped for the remote. But it just wasn’t… Ricky. And it just wasn’t great.