Red Eye’s Andy Levy On Bill Maher: All He Has Going For Him Is Outraging People
Video

Red Eye’s Andy Levy On Bill Maher: All He Has Going For Him Is Outraging People 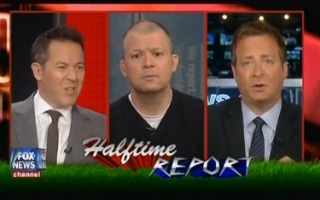 While many of us were off dreaming of grits and Etch-a-Sketches and pipelines, Red Eye‘s Greg Gutfeld — echoing comments he’d made to collegue Greta Van Susteren earlier in the night — and his crew offered up their take on Bill Maher‘s recent call for people in the public eye to “stop apologizing.”

“He’s a hundred percent right,” agreed the lovely and effervescent Jim Norton. “We’re such a phony country. We never defend each other. It’s like every time somebody has a verbal faux-pas, we use it to jockey for position in the next argument. The liberals are frauds and the conservatives are frauds when it comes to speech.”

Country singer John Rich has a slightly different take, sharing that he would very much like to “shoot Bill Maher in the [THIS ISN’T HBO, GUYS] with a BB gun.” Just once. That said, he did admit that he admires that blood-filled tick of a man’s conviction. See? We all can get along. Watch and love, below:

Later on in the show, Andy Levy, cat person, chimed in with his halftime report. Levy agreed with Maher’s op-ed.

“But here’s the thing,” he added, “Maher is full of crap. And here’s why: At this point in his career, all he has going for him is outraging people. That’s all he tries to do. His Tweets back in December, about Tim Tebow — they weren’t funny, they weren’t humorous. All he did was throw words like Tebow, Satan and Hitler together because he knew it would outrage people and that’s what he feeds off of.”

Why is Andy Levy always so shy? Why won’t he just tell us what he feels?

Maher may be calling for people to stop being outraged, he added, but all he tries to do is inspire outrage. Most likely to feed his ego with the attention that comes with making people outraged.

Have a look, via Fox News, and find out just how many [HBOs] Maher possesses: