Red Eye Crew Skewer Trump For Being An ‘Overwhelming Jerk’ 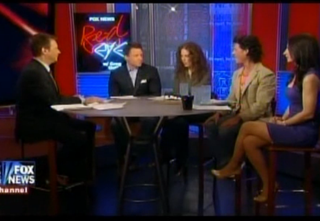 The Red Eye team is rarely one to run away from a circus (or a trainwreck), but when it comes to the latest hullaballoo surrounding Donald Trump‘s increasingly growing viability (?) as a presidential candidate in 2012, they had little sympathy, politically or otherwise. Saturday morning host Andy Levy kicked the crew off denouncing Trump’s insistence of “recycling falsehoods,” but by the end of the segment it was Bill Schulz who was going hair-to-hair against the Donald.
Levy, stepping out of the ombudsman role to fill in for Greg Gutfeld, opened with a monologue highlighting the detriment to the national discourse that Trump’s birth certificate attacks presented. To Levy, talking about the birth certificate that the Hawaiian government has repeatedly confirmed exists takes away the spotlight from more legitimate issues, “things like ‘What the hell are we doing in Libya?’ and ‘Does the President even know what we’re doing in Libya?'” Aside from the serious military issues fully overshadowed by the strawberry-blond fury of Trump’s persona, Levy continued, “recycling falsehoods about Obama’s grandmother saying he was born in Kenya does absolutely nothing to put people to work, and does absolutely nothing to help us figure out to tame the government so that future generations of Americans aren’t speaking Chinese as a first language.”

The panel overwhelmingly agreed with the assessment that Trump’s birtherism was useless to the nation, though not all knew what a “birther” was coming in. Fox Business’ Chris Cotter confessed he thought a birther was a “pregnant woman” (“first of all, you’re fired,” retorted Levy). Jokes aside, Schulz took the banner from Levy, arguing that he would be surprised to see Trump run at all, all the political hype being merely Trump promoting his show, “spectacularly, I might add.” Specifically, Schulz didn’t see how Trump would be able to withstand the pressure of areal campaign, as it would force him to talk about, among other things, “being an overwhelming jerk.” Levy eventually gave playing devil’s advocate to Schulz a half-hearted attempt, asking whether the birther issue “fires up the base,” but couldn’t keep to himself that that phrase didn’t actually mean anything for very long.

Cotter provided perhaps the kindest word towards Trump, that, “he’s not a politician and that’s his appeal,” with fellow guest Remy Spencer adding that she could see President Obama getting “a run for his money” in 2012 (though hopefully not from Trump). Otherwise, All the support Trump could muster from the group was Schulz salivating at the prospect of Trump having to talk about real issues, like gay marriage, which he said he opposes because “it just doesn’t feel right– much like his wife said on his wedding night.”