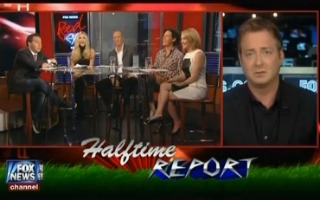 The folks at Red Eye turned their attention over to this past week’s Al Smith dinner, with guest Ann Coulter praising Mitt Romney‘s delivery. “In the words of Chris Matthews,” she said, “Mitt Romney committed murder.”

But, as Dana Perino pointed out, it’s not as if a good performance will make a difference for Romney. A rise in the polls, she said, would only be argued and contested. And, as Andy Levy would later point out, Republicans are now currently cheering on Gallup poll results while Democrats hold up Rasmussen’s results as more accurate. Up is down, down is up, Mika is wearing sleeves.

The group also discussed this week’s New York Times correction on a story about a suspected terrorist straight-up chilling in a luxury hotel while drinking mango juice. The paper later noted that the man had, in fact, been sipping a strawberry frappe. Perino felt this B.S. was essentially a slap in the face to the U.S., while Shulz used it to compose a new slogan for the Obama campaign: Terrorists will go from drinkings frappes to eating crap.

We also learned that Shulz lives in an area that is both lousy with diplomats — hence his hatred of foreigners — and simply silly with prostitutes.

Watch the segment below (Including the Halftime Report), via Fox News: