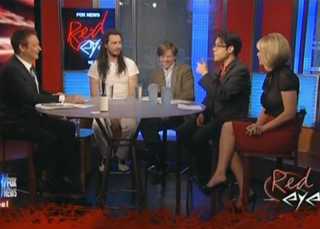 Last week’s Republican debate seems to have done its fair share in shaking up the Republican presidential race– for one, polls show Newt Gingrich enjoying somewhat of a resurgence, and Herman Cain feeling the burn of his sexual harassment accusations. On last night’s Red Eye, host Andy Levy noted the worst news yet for Cain– the American Mustache Institute’s withdrawal of their support of his candidacy (It’s true)– and discussed to which possible “not-Romney candidate” the Republicans could now turn.

Levy’s panel for the night didn’t seem particularly enthused about the chances anyone left really had; Dana Vachon tried to note that he thought “Jon Huntsman would be better than Romney,” but realizing the futility of that sort of mumbled it away. John DeVore seemed excited about having to talk about Gingrich– “he shows up, he leans on the podium, he’s sassy like Bea Arthur,” he praised– but in addressing the mess that is Rick Perry seemed less optimistic about the fact that Perry “hired the worst people to ill-adivse him and ill-prepare him for a run he thought would be easy.”

For his part Andrew WK seemed a little more out of the loop on Cain than the rest of the panel, admitting, “I had never heard of Cain until the accusations.” This, coupled with a rise in fundraising, gave him the impression that it was all “reverse psychology publicity,” adding, “this guy and all these other candidates to me are as colorful and crazy as a Godfather’s supreme pizza.” So of all these candidates, who could surge in the aftermath of the debate, asked Levy. Vachon suggested Ron Paul for his “grandfatherly” reaction to the Rick Perry memory loss moment and his “claw of governmental dismemberment.”