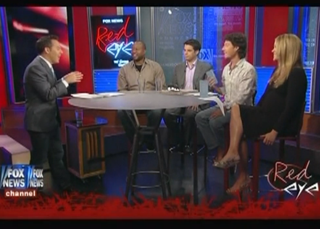 Former Vice President Al Gore made headlines this week by calling for a revolution in America, much like the “Arab spring” in the Middle East that has mostly led to chaos. Whatever his intentions may have been, it earned him a skewering from the Red Eye panel Friday morning for “comparing oppressive regimes with democracy” and generally not knowing what such a revolution would entail in a civilization like ours.

Host Greg Gutfeld played the clip from “Captain Charisma,” and for once appeared mostly speechless. Gore called for a “grassroots movement,” but not the Tea Party. “Does Gore even know what an Arab spring means?” Gutfeld asked. The panel took turns picking out what was most absurd about his statements, Jill Dobson summing them up as “we need something just like the Tea Party, except everyone agrees with me.” She also wondered what a “stalking horse” was– a term Gore threw in there to describe the Tea Party (Andy Levy later informed everyone it was an idiom meaning “decoy”). Her co-panelist Jamie Weinstein hoped “the wizards at MSNBC give him a rhetorical lashing” for comparing President Obama to a tyrant, a point he argued seems to have been lost by the wayside in light of him calling for a revolution.

Meanwhile, Sherrod Small had some sympathy for Gore. “Al Gore was vice president, he gets the same respect we gave our vice principal,” he noted, which probably caused some frustration. The frustration point came up later as well, when Small then turned to blame his ex-wife Tipper, though Levy blamed the fact that he did not become president in 2000. Small wasn’t alone in not taking Gore all the way on in the panel, however– Bill Schulz had some sharp words for the Tea Party, arguing that their unwillingness to compromise made them impossible to deal with. “I used to think the only population in America that didn’t understand compromise and couldn’t do it were infants,” he argued, “but now American babies are not alone: they have the Tea Party.”

The discussion and Halftime Report via Fox News below: