Red Eye Panel: Obama Is ‘In A Bubble.’ His Problem Isn’t His Messaging, It’s The Message.
Video

Red Eye Panel: Obama Is ‘In A Bubble.’ His Problem Isn’t His Messaging, It’s The Message. 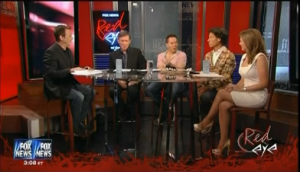 Friday night’s Red Eye cast its hazy, sleep-deprived gaze on Barack Obama‘s recent remark that the biggest mistake of his presidency was one of messaging, as well as on a recent New York Times op-ed piece by Czech director Milos Forman calling on critics to stop referring to President Obama as a socialist, in part because it undermines the plight of people who actually lived under oppressive socialist rule.

Panelist and Fox News anchor Patti Ann Browne thought the issue with Obama’s is not with his “storytelling” (a phrase she found condescending to the American people), but with the policy he’s trying to tell a story about. Andy Levy joked that he’d just assumed the detractors are “all racist.”

Host Greg Gutfeld, wearing the shirt I wore to my friend Heather’s 4th birthday party in 1988, opined that Obama is essentially living in a bubble, and becomes shocked to learn that Americans “outside of the teacher’s lounge” don’t agree with everything he espouses.

Kurt Loder, meanwhile, felt that Obama wasn’t giving himself enough credit, because the President has managed to inspire many “to storm out to the polls in November.”

When talk turned to the reality that there are different forms of socialism (and that ObamaCare can fall under one of these forms), Levy joked that what Americans call socialism, people in England refer to as a “pram.”

“I think that Forman’s comparison is really stupid,” Loder added later on. “When did he become a musician? I must’ve missed that. You know, as a film director, why don’t we talk about how would he feel if some government bureaucrat came to his sets and told him how to ‘harmonize’ his films?”

Gutfeld added that, while conservatives will always refer to liberals as “pernicious socialists” because that’s just how this game is played, the fact remains that we, the U.S., won against socialism, “so we fear that we are adopting the game plan of the losers, which is expanding entitlements and cutting, shrinking defense.” Thus, it’s up to us to “call b.s.” if we see ourselves moving in the direction of what ultimately amounts to the losing side — at least in “real America,” outside of the academic bubble.