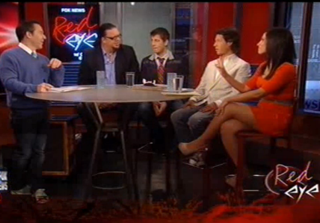 New York City Mayor Mike Bloomberg is seriously concerned about the jobs crisis– so much so that yesterday the mayor predicted the possibility of Cairo- and Madrid-style riots in the streets of New York by the unemployed. Needless to say, the cast of the New York-based Red Eye didn’t seem particularly concerned, first and foremost because Cairo is a “horrible, horrible place.”

Host Greg Gutfeld started the discussion by attributing the comments to the way Bloomberg operates– “nothing like the alarmist approach to bring people together!” Panelist Penn Jillette agreed that he saw the threat as slight, though found more offensive the power that politicians have to say such threatening things, asking “can you imagine if a hip-hop artist had made the exact comment that he made?”

Gutfeld agreed, but argued that the approach hinged on Bloomberg himself. “He has such low expectations for humanity,” he half-joked, citing the time Bloomberg suggested the Times Square bomber could have been someone unhappy with their health care. Jillette added it was not only his pessimism that blinded him, but the fact that he did not know the conditions that led people in Cairo to revolt. “I have been to Cairo,” he noted, “it’s a terrible, terrible place.” The worst thing about Cairo to Jillette was the fact that “they force the women to dress like Batman,” but the high levels of pollution didn’t help, either. “I was on the edge of rioting,” he joked, “and I’m not a rioting kind of guy.” To Bill Schulz, however, it wasn’t just the culture in Cairo that made the different– it’s New York. “I just think we’re too lazy for this kind of thing,” he argued, citing the lower crime rates and the fact that “we have couches that don’t have mice in them.”