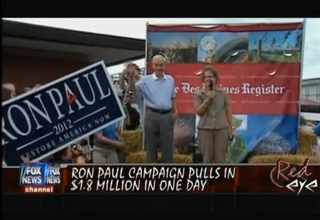 The Republican field has seen, to many observers’ surprise, the rise of Rep. Ron Paul as a serious contender, despite lack of media attention. Now a new Gallup poll is showing that Rep. Paul may be the most competitive of the Republicans currently in the race in a general against President Obama. On last night’s/this morning’s Red Eye, the panel took on the question of whether the polls meant Rep. Paul had a real chance, but came out more strongly anti-polling than pro-either candidate.

The poll showed President Obama leading Rep. Paul 47% to 45% among all possible voters, which put him closer to defeating the president than Rep. Michele Bachmann or Mitt Romney in some cases. Host Greg Gutfeld opened the discussion with these facts, noting that Rep. Paul was also facing an uphill battle on media coverage (which he did by accusing co-host Bill Schulz of not including Rep. Paul in most of his “coverage”). Schulz agreed the polls were good for the Congressman, with the caveat that “the important thing to remember here is that polls suck.” He continued this argument later in the segment, and received some agreement from the panel, when he noted the fact that “the people who answer poll questions are people who answer polls,” which makes them automatically less useful than they are in theory (that argument was buffered on the panel by the suggesting that people who answer phone calls for polls are people who land lines, who are too old to tell whether they are talking to pollsters).

Panelist Matthew McCall thought there may be something to the polls, however, arguing that “the fact that the independents are sticking up for Paul shows that he’s got a bit of a chance.” He did seem to enjoy Rep. Paul’s disposition of being “always mad” in debates, though ended up being somewhat alone in his belief that Rep. Paul had a serious chance based on these numbers. Panelist LeeAnn Tweeden didn’t think he had a chance at all, while Paul Mercurio thought the speculation was premature, “like picking a baby name on the first date.”

During the Halftime Report, ombudsman Andy Levy weighed in on Rep. Paul’s chances– “zero chance”– but warned everyone that the polls were meaningless, as “George Pataki has yet to bring his energy and charisma officially into the race.” He also condemned Schulz for ignoring Rep. Paul in his serious campaign coverage– “you have a platform, sir, use it appropriately.”