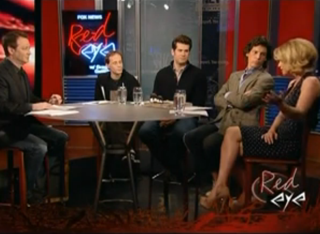 If you’ve been on the internet at any time this past week, you’ve probably heard the name Joseph Kony. The Ugandan warlord’s atrocities have become a major topic in the national discourse after the California organization Invisible Children began a campaign to make him a household name. Like any newsmaking campaign, however, it has gotten mercilessly attacked by many who say the video is factually incorrect, and on last night’s Red Eye, the panel tried to parse the appeal and explain why it has been this successful.

RELATED: How Kony 2012 Is Raising Awareness, But Also Raising Questions

Host for the night Andy Levy noted that the video had become “Rebecca Black viral,” and set the stage for debate. No one on the panel disagreed that the cause against Joseph Kony was too strong to ignore, and Steven Crowder noted that the entire experiment was cool in that it proves “you don’t necessarily have to dump a ton of money into a movement anymore” thanks to social media.

Jake Fogelnest had a different argument for why the video was so popular: “tweens love Ugandan warlords.” Jokes aside, he noted that “the politics is very complicated” to the point where oversimplifying seems somewhat inevitable. He admitted, “I couldn’t figure out what was going on so i just ignored it,” and instead called for a campaign against bronies.

Even Bill Schulz had some good things to say about the campaign, as “the stupid ignorant tweens know who this guy is, and some of them may actually be donating money.” That said, he did condemn Levy’s Rebecca Black comment as “racist.” Levy shrugged it off, and shifted gears to the bizarre way that internet outrage works: “all week we saw outrage against Rush Limbaugh for calling Sandra Fluke a slut, then all of the sudden it was Kony, and it’s the same level of outrage!” Levy also noted the criticism of commentators like Teju Cole, who described the campaign as fulfilling “the sentimental needs of white people and Oprah.”

Then there’s the fact that the campaign is pushing as one of its slogans “Kony 2012.” “That’s awful!” Levy complained, as it made Kony sound like a politician that merits support. A sheepish Crowder replied with some “breaking news”: “No one else is aware Kony is Ron Paul‘s running mate?”