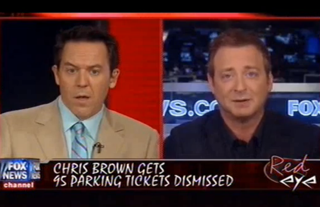 In the world of bizarre rap (?) feuds, there are few quite as strange as the one between Chris Brown and Red Eye ombudsman Andy Levy, which began after the latter tweeted a joke about domestic violence to the former, who was convicted of such a crime. On last night’s show, host Greg Gutfeld couldn’t resist bringing up Brown’s strange parking violation problem, for which the entire panel took Brown to task.

The last time we left this feud, Brown tweeted something incoherent about blacklights and sexual activity detection with the command, “Be nice!!!” But he has had bigger fish to try than that, like the 117 parking violations he has received for parking in a handicapped spot, 95 of which have been dropped. Gutfeld quickly cut to the pressing questions: to get permission to park in a handicapped spot requires a handicap– “given that hes a violent moron, does that qualify?”

Levy seemed confused. “I thought he caused other people to have to park in handicapped spaces.”

The segment continued with some comical hearsay from Anna Gilligan about Brown’s troubled Good Morning America appearance that ed guest Mike Baker to add, “I wasn’t there in the compound in Abbottabad, but I heard they picked up some documentation on Chris Brown.” Gilligan later made the point that Brown seems to have great karma– “he gets out of everything without any real punishment!”

What’s more, beside the destructive elements to him, the panel seemed unconvinced he deserved his status as acknowledged “talented” person of some sort. Asked Gutfeld: “Should an artist have a long, successful career before being an abusive jerk?” Levy joked that, sure, Roman Polanski may be off the hook, with Bill Schulz rounding it off with the reminder that “Mel Gibson waited until he got an Oscar before allegedly hitting women.”