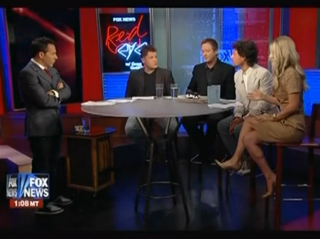 After a temporary absence, the folks at Red Eye returned to evaluate the programming that preempted them– this week’s Fox News Republican debate. Does Rick Santorum really care about the gays in Iran? Which candidates would eat Obama’s dog food? And is Rep. Michele Bachmann automatically cuter by being several seconds late from a break? Greg Gutfeld asks the tough questions.

The panel was particularly lively this time around as it welcomed ombudsman Andy Levy to the panel (it was his birthday), who had many questions about the answers to Thursday’s debate– but especially, what was going on between Rep. Bachmann and Tim Pawlenty? “I sort of want to know what happened afterwards,” he commented, calling it a “good Moonlighting vibe.” He also expressed some outrage that only Mitt Romney refused to “eat Obama’s dog food,” thereby leaving the possibility open that they may.

Panelist Anna Gilligan seemed more irritated with the confusing answers than outraged, however, noting that she didn’t see how Rep. Ron Paul could reconcile believing marriage is between a man and a woman and also a states’ rights issue, or how Rick Santorum “talks anti-gay stuff all the time but then he says he’s worried about the gays in Iran.” British panelist Kevin Godlington was just amused. “I love the fact that you have so many people to choose from!” he exclaimed, though took a stab Byron York‘s question to Rep. Bachmann on submission, which the panel mostly believed in the context of previous statements was fair.

The video via Fox News below: