Red Eye Panel: With Debate, Trump ‘Threw His Own Birthday Party And Nobody Showed Up’
video

Red Eye Panel: With Debate, Trump ‘Threw His Own Birthday Party And Nobody Showed Up’ 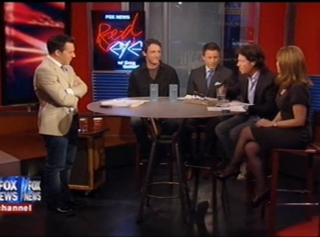 The threat of a canceled Newsmax/Donald Trump debate looming over the Republican primary field has the once hostile, but increasingly comfortable with the idea Red Eye crew waiting for the ultimate word on the matter, and laughing at Trump’s sour response to bleeding candidates out of the debate every day. It was sad, explained panelist Dan Soder, like “a guy who threw his own birthday party and nobody showed up.”

Soder explained that it was as if he had prepared thoroughly to moderate his debate and found no one wanted him around, something host Greg Gutfeld admitted elicited some sympathy within him. Plus, Gutfeld added, “I used to think it was a circus, but now I think it’s more of a sideshow.” Panelist Chris Cotter was not as positive on the matter, however, lamenting that “it’s all a side show, the entire thing… everything is a joke and The Donald, just when he gets out of it, he jumps right back in.”

Trump found some defense from Patti Ann Browne, however, who noted that the economy was, indeed, horrible, and “yet the Republicans could conceivably lose to Obama… you can’t blame the guy for noticing,” she argued, that voters aren’t satisfied with the menu before them. Gutfeld agreed, while Bill Schulz had another gripe entirely: “why is this a thing? This C-list celebrity who leans Republican is demanding that you dance for him,” he argued, and that was enough for a headline. “It’s as if Chuck Norris was like, ‘come to my house right now, I’ve got questions for you,'” he concluded.

During the Halftime Report, Andy Levy began by expressing his shock that there hadn’t been any primary elections yet at all, and adding that he did have one possible route the election could go he would like to see: “I’m starting to hope Donald Trump, Gary Johnson, Ron Paul, a bunch of other people run as independents. Let’s spice things up! Why not?”

The panel via Fox News below: