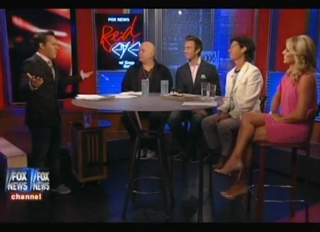 In a bizarre turn of events, the most prominent topic on Glenn Beck‘s last week on the program wasn’t the impending progressive threat or the corruption of the Obama administration, but how a bunch of obnoxious New York liberals may have spilled wine on his wife. On last night’s/this morning’s Red Eye, the panel didn’t doubt the story, calling the witness admitting to her friend spilling wine “stupid for doing so,” but also questioned why Beck thought he could survive such a public appearance.

Playing a clip from Beck’s show this week, host Greg Gutfeld railed against the people who spilled wine, accidentally or not, on Beck and his family. “Bullying is cowardice exploiting opportunity,” he argued, though, in playing the clip of Beck describing the attack, he added the disclaimer that “Glenn gets upset a lot, so you never know how much of this is theater.” That said, “the bully need not a spine to toss the wine,” he concluded, and in “targeting someone because they’re different– you aren’t a New Yorker, you’re a fascist– or at least from Philly.” (that last line almost got him a slap in the wrist from Andy Levy, but, “nah.”)

His panel, for the most part, agreed on the points against the wine spillers, though Courtney Friel, being from Philadelphia, took a bit of offense. The general sentiment appeared to be that the cowardice displayed by those claiming the event was an accident was uncouth (Matt McCall suggested “having some balls” when attempting to be completely rude to a celebrity), but that Beck had to expect at least some minor attacks from people at an event such as the one he attented. “You don’t get to go to the movies in Bryant Park [as a celebrity],” argued Robert Kelly, “you don’t get to pretend you’re the average Joe– that’s like Salman Rushdie visiting Mecca.”

The most disagreement Beck received on the panel was from Bill Schulz, who suggested the entire field trip was a product of Beck “needing material for A-block.” “He didn’t have anything to talk about that day,” he argued,” so he decided to go to the middle of Bryant Park.” He also argued that “more cowardly is the way this girl has been treated,” referring to the lady who wrote to New York claiming the entire ordeal was an accident, who has had profiles written up for her on Adult Friend Finder– which Schulz claimed he did not know about, though was refuted by Levy during the Halftime Report, who thought he denial was “cute.”

The panel talk and Halftime Report via Fox News below: