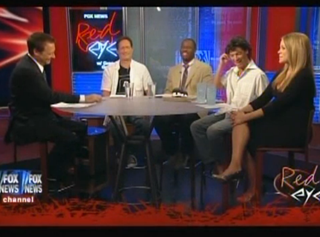 It’s been about a month, so Weinergate feels a good lifetime away at this point– what with the country about to default on its debt and that menace Casey Anthony on the loose and every other fine story in our news cycle. But not everyone has forgotten– Hillary Clinton, for example, is said to still be cross, and an Al-Qaeda culture magazine has published a full page attack against “Angry Weiner Head.” The Red Eye crew gives us the best of the post-Weinergate aftermath.

As host for the morning Andy Levy reported, the New York Post has the latest on Weiner, who, it is reported, is trying to figure out how to convince his wife, mother, and, um, our Secretary of State that he is “cured.” Of what is not entirely certain, but he really wants people to think he’s “cured.” In other news, Al-Qaeda magazine Inspire has just published a full-page attack on “Angry Weiner Head,” prompting Levy to ask, “please tell whichever jihadi who wrote that line that we’re hiring.”

The panel had several points to make about this new development, the first being, of course, how Weiner’s mother and wife ended up on par with his wife’s boss in the realm of people who need to forgive him. As panelist Jill Dobson put it, “when I screw up, my first thought isn’t ‘what does my spouse’s boss think of this?'” That said, fellow panelist Kmele Foster noted that Clinton was an apt person for the problem– “Hillary has a knack in dealing with creeps.” Radio host Anthony Cumia noted the absurdity of using the word “cured” to described how he must feel, and joked with Levy about the hilarity of Al Qaeda publications– “their Where’s Waldo? is hilarious– he’s always in mass graves.”