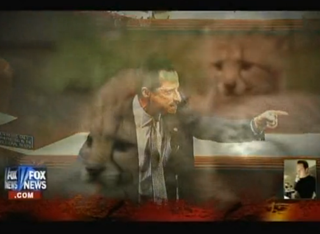 After three weeks of non-stop, painfully easy puns, the saga of Anthony Weiner and his photophilic body has finally come to a close. On last night’s Red Eye, this revelation led host Greg Gutfeld to ask a very important question: what’s a comedian to do in a world without Weiner? To thank him for the three weeks of embarrassing hilarity, Gutfeld and crew put together a “fond look back” at the best of Weiner, complete with touching music and baby animals.

“It is Day 1 of the post-Weiner era,” Gutfeld declared during the opening of his Greg-a-logue, lamenting that he “already miss[es] the little guy” for making “life worth living.” After playing his touching goodbye to the Congressman and his model poses, Gutfeld demanded that he “come back refreshed and run again, because we need you.” Gutfeld’s panel agreed enthusiastically (or, rather, panelist Sherrod Small responded “why not? sure” to the question of whether Weiner was missed. Close enough.), and demanded his return. But not all believed he was gone for good– fellow panelist Seth Swirsky fully expected to see Weiner again “on MSNBC by Monday or Tuesday,” expecting the Eliot Spitzer model to kick into full gear.

In what seemed an unintentional deviation from the topic, panelist Kayleigh McEnany triggered a side conversation about the Founding Fathers’ sex lives by arguing that “having guys like Weiner around hurts America” (key line in this discussion: “Benjamin Franklin was inventing electricity every night!”), and the discussion ultimately culminated with Bill Schultz asking either Weiner or wife Huma Abedin to “call me, because I’m not picky.”