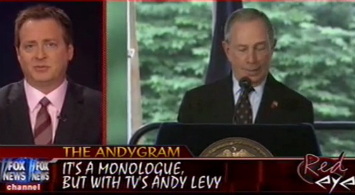 On Thursday night’s edition of Red Eye, substitute host Andy Levy delivered perhaps the most vicious criticism of New York City Mayor Michael Bloomberg and his proposed ban on large sugary drinks, calling the mayor “Dear Leader” and a “neo-prohibitionist,” while likening the hypocrisy behind the ban to something the Soviet Union’s leaders would have committed.

“Honestly, the words I would like to use express my opinion of the Dear Leader and his plan can’t be said on television,” Levy began. “This is a guy who takes a pathological joy in lecturing us about things we enjoy. This is a guy who thinks it is his job, or more accurately, his calling to ban cigarettes, trans fats and whatever else he can get his grubby little mits on,” referring to Bloomberg’s bans on smoking cigarettes in public places and trans-fat use in restaurant kitchens.

“This is a guy who puts salt on his pizza,” he continued. “As the New York Times reported several years ago, not only does ‘Mad Mike’ put salt on everything, he loves burnt-bacon-and-peanut-butter sandwiches and can’t get enough of cheeseburgers, hot dogs, and yummy fried chicken.” 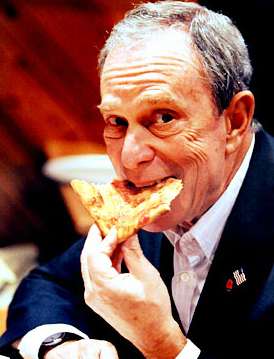 These photos illustrate the exact “good for me but not for thee” mentality for which I criticized MSNBC’s Mika Brzezinski yesterday. While the mayor supposedly maintains a 2,000-calorie daily diet with great vigilance, he assumes that the rest of us do not understand portion control.

The mayor somehow decided it was smart to call for a large sugary drink ban while his administration openly supported National Donut Day. Earlier today, Bloomberg told NBC’s Matt Lauer that donuts are okay in moderation, like “most things,” which prompted Lauer to ask him why donuts are okay, but not sugary drinks. Of course, Bloomberg’s response was to say that, in the case of sugary drinks, the city will use government to force that moderation.

What hubris. And hypocrisy. Mayor Mike also had the nerve to tell Lauer that donuts are okay because they have historical significance, dating back to World War II — essentially admitting to selective outrage over unhealthy foods. Even liberal Jon Stewart called the mayor out for this ridiculously selective nannying.

In his “Andy Gram,” Levy went on to make a somewhat extreme but illustrative analogy:

It’s no surprise that someone who lives to curtail other people’s freedom loves to exempt himself. Think of the hypocritical leaders of the Soviet Union who never seem to want for anything, even if the communism they enforced caused bread lines or worse for ordinary citizens. Is my analogy overwrought? Eh, maybe. But consider that Bloomberg’s large drink ban needs the approval of the city’s board of health and that this is considered likely because all of the members have been appointed by him. Politburo, anyone?

Levy didn’t stop there, going on to ridicule Bloomberg and his ilk’s condescension in governing:

I have nothing but contempt for neo-prohibitionists like Mike. And why shouldn’t I? After all, they have nothing but contempt for me and all of us. They think they know what is best for us because they are smarter than we are; and the fact that they were elected to office gives them the right to treat us like children. They forget that they are supposed to be serving us, not stopping us from being served.