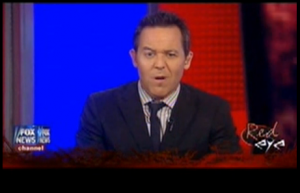 Red Eye host Greg Gutfeld is, as you may have guessed, none too pleased with Wonkette writer Jack Stuef‘s recent post about Trig Palin – a post that frequently referred to the three-year-old as “retarded” and insinuated he may have been the product of rape and incest. Stuef has since apologized for some of the more offensive choices he made in writing his article, but stands by the post’s basic idea – that Sarah Palin uses her son’s disability as a “prop” to get attention and support.

Gutfeld referred Stuef as a “piece of crap” and, worse, as a hirsute Brooklyn-dwelling hipster who shoots pool and downs PBR while making fun of the disabled children of Republican politicians. Gutfeld then showed a picture of Stuef and remarked that, “Well, maybe he does know suffering… God, what a hideous, pathetic tool.”

And, you know, we get the argument: People shouldn’t blog from glass basements, and it’s lazy and vile to mock a toddler, disabled or otherwise. But we’re not sure pointing out that Stuef isn’t conventionally attractive (by non-Brooklyn standards, at any rate) adds anything to the conversation. He wrote some horrible crap, he was called out on it, and he apologized. (Whether his apology was sincere or not is, honestly, impossible to prove and beside the point. The correct action was eventually taken, and his website continues to pay the price for his less than stellar judgment.)

Plus, saying that the man’s drink of choice is Pabst? That’s just downright cruel, Greg.

Take a look at the segment, via Fox News, and let us know what you think of Gutfeld’s takedown: